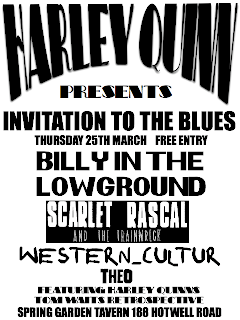 Oh dear, oh dear... where do you start? It wasn't looking promising when the promoter (Harley Quinn - not his real name, I suspect) first contacted us about this one, as he didn't want to pay us anything apart from "a couple of drinks"... we were underwhelmed by this offer, & eventually he agreed to cough up some cash so off we went.
We played this place about 15 years ago when it was called Dirty Nellies, an ill-advised foray into Oirish theme-pubbery, but it's recently been done up as a music venue, and very nice too - good stage, nice acoustics, decent PA and a genial landlord who doubles up as sound engineer.
The enthusiastically burbling young Harley then told us that the 2 bands who were supposed to be supporting us had like, er, pulled out at the last minute, but it was alright 'cos a couple of his mates were like, literally on the way here on the bus, and they could play an acoustic set...
"Are you going to kill him, or shall I..?" growled the landlord as we set the gear up.
Harley's mates showed up after a while, and he took the opportunity to disappear, presumably to rethink his career path... we played the gig, and it turned out to be great fun, we all really enjoyed it - thanks to Emily & Ally for turning up so we had someone to play to! A good little venue, and I hope it does well.
Harley needless to say never reappeared, but to his credit (and much to our surprise) he had left some dosh for us, so all's well that ends well...
Posted by slylittlei at 5:01 PM No comments: Links to this post

The George, and The Men They Couldn't Hang

A busy couple of weeks, starting with a gig in The George at Bradford on Avon last Saturday - always a pleasure to play here, especially now that our favourite landlord, the Porcupine tree-loving Darren, has got Bath Ales Dark Hare on! Such a pleasure in fact that we stayed there sampling it till the wee small hours - cheers Darren!
On St Patricks Day we were in Swindon, at the 12Bar supporting The Men They Couldn't Hang, and a cracking night it was too - great PA, a very good young sound engineer name of Kieran, and a proper sticky floor to boot. We seemed to go down well, and there was a fair bit of dancing going on by the end of our set, which ain't bad when you're the support band.
I didn't see much of TMTCH as I had to drive home, but thanks to them for the cheerful loan of their drumkit & slightly less cheerful loan of their bass amp (think I'll bring my own next time), and hopefully we'll be back in this venue again...
Posted by slylittlei at 4:31 PM No comments: Links to this post


A new venue for us this, and very nice too: smallish pub in the back streets of Weston with a great atmosphere, a policy of putting on original music and real ale at two quid a pint - you can't go wrong, really!
The only fly in the ointment was the lack of punters, but apparently they don't usually do music on Saturdays, so this was a bit of an experiment. Hopefully there'll be a few more next time, but it was good to catch up with some familiar faces we haven't seen for years, when we used to regularly play the late lamented O'Malleys Bar, good stuff...
Cheers to Dave the landlord for the video clip above, too.
Posted by slylittlei at 5:18 PM No comments: Links to this post