Finally rescued & converted from the moldering VHS on top of the wardrobe, here's some video of the Brew Band playing a little stage at Glasto back in 1995!
It was shot by a lovely couple whose names now escape me, and posted to us later in the year.
There's bits from two separate gigs here, we didn't rush off and change halfway through... I can only excuse the terrible shades I'm wearing in the first bit by saying that I had a monumental hangover, I think I only crawled out of bed 10 minutes before we went on.
Right at the end of 'Wishing we were Younger' I managed to break my bottom E string, not an easy thing to do, and to this day I can remember the feeling of horror... good job I only had an instrumental to struggle though after that (and 'struggle' is definitely the right word)
Posted by slylittlei at 8:16 PM No comments:

When I started going to festivals, they didn't have their own Twitterfeed (I know, right? OMG!), and they were regarded as the preserve of long-haired weirdos in funny hats in pursuit of free love & illicit chemical stimulation, which was fair enough, because they were. 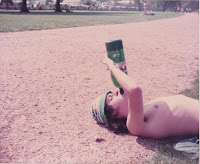 Here I am in 1981, having given up on the free love, and settled for a couple of litres of vodka & orange by the banks of the Thames. It's an attitude which has served me well ever since.

On the evidence of Farmfest 2011, a lovely little 3000 capacity festival in the wilds of Somerset, nothing much has changed, apart from the constant social media input & the mobile phones (last time I went to Glastonbury as a punter, I had to meet up with my mates by arranging for one of them to ring me from a call-box on my new-fangled pager to tell me where they were...) Certainly the toilets haven't improved, but apart from that minor gripe, a really well put together event - the main stage headliners Dodgy finished a little while before we went on in one of the two marquees, so we got a nice big audience for our midnight set, and it was a storming gig - encores, singing along, the lot. Haven't enjoyed a gig as much as this one for ages - well done to all the organisers, and the highly effective soundcrew, who sorted us out in 5 minutes flat - we all crawled off to bed very happy indeed!
The next morning though, the Black Rat and even more threateningly named Bull Beggar cider had left it's mark on us to a certain extent, but had taken a terrible toll on the young lads & lasses crawling out of their collapsing tents, shrivelling in the sun like a coven of vampires... in funny hats. 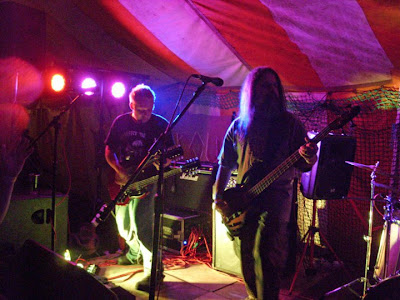 Cheers to Ollie for the picture above, lots of splendid hats to be found here.
Posted by slylittlei at 11:05 PM No comments: