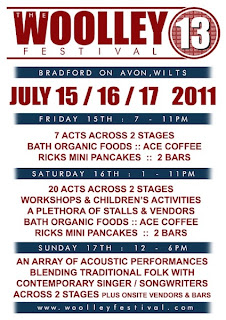 To Bradford on Avon last Friday, for the 13th Woolley Festival, a cracking little do organised by Darren, the landlord of the George on Woolley Street.

We last played it last a couple of years back when the whole thing was crammed into the street in front of the pub, which was pretty hard work to be honest, especially trying to manhandle the gear through a sea of punters to get to the tiny stage, only to find that the Pink Floyd tribute act that were going on last had decided to set all their gear up during your setup time, and not actually left any room on the stage for you... This is the sort of thing that upsets normally mild-mannered musicians, and Nige, our then Mandolin player, turned a worrying shade of puce before offering to fight pretty much everyone within range...

No such problems this time though, as the whole shebang had been relocated to a nice big field down the road, with everything the discerning festivalgoer would want to hand. Except for the Unicorn Petting Zoo... we always request one on our rider, and never get one, I can't understand it.
The band on before us were a disconcertingly young trio called the Operation, and I wouldn't be surprised to hear more of them, they were extremely good and very, well... young. When they came off backstage after their set we all looked like their Mums & Dads come to collect them...
Our set went down pretty darn well, especially as there were a couple of brand new songs in there we'd never tried out before, and a good time was had by all.

Was hoping for a few photos to materialise, but none so far... well done to Darren & his team for organising such a great event, and here's hoping we'll be around for number 14!
Posted by slylittlei at 9:30 PM No comments: