A whole Summer of Festivally goodness...

This has been the band's most successful year yet in terms of Festivals, with twelve gigs including a record seven in July alone! Shame that the last one on the list, Upton Cheyney Chilli Festival at Bath Racecourse, had to be cancelled due to financial concerns, but still a list we were dead chuffed with. 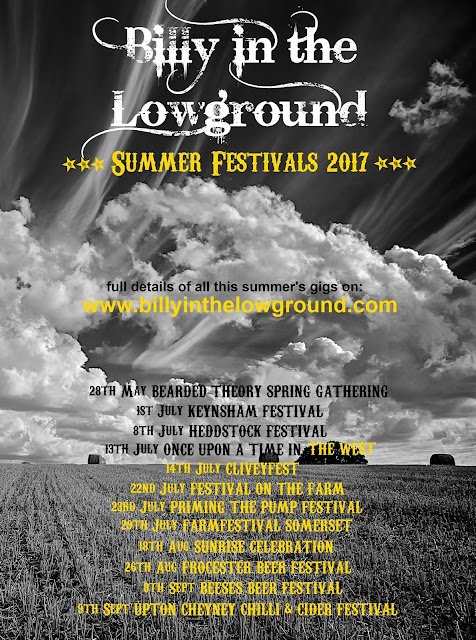 After the full-on weekend that was Bearded Theory, the next one, at the small but perfectly formed Keynsham Festival was a much mellower affair, with a relaxed 'Village Fete' feel to it... in an unheard-of reversal of normal festival timings, we even got to play a bit longer than intended, as one of the later bands had dropped out at the last minute.
The following weekend was Heddstock, near Heddington, a one-dayer in a field, with a great stage and rig, and a lovely crew who looked after us really well - there ought to be some good pictures somewhere, as there were plenty of people snapping away, but I haven't actually seen any yet - will keep my eyes peeled...

An excellent evening the following week at Once Upon A Time in the West Festival in Wiltshire - another really well run event with a good mix of music. We were the first band on Thursday evening, which worked out rather well for us as the usual run of things at a festival is you get a quick linecheck after a manic 10 minute changeover from the previous band, so we got to do a nice leisurely setup and a proper soundcheck - luxury! Got some great photos out of it as well - many thanks to The Unofficial Gig Photographer, who took them!
The following night we played Cliveyfest, a small charity event in Clivey (unsurprisingly) that we did last year, and this year we had a much better timeslot and longer to play, which was nice, although it is one of those events where no-one really gets enthusiastic until 3 songs before the end... perhaps a slightly smaller stage might work better? Special mention due to the band that played before us, The Riven - an excellent old-school original rock band with terrific female vocalist. Go see them if they're in town.


Another two-festival weekend followed, with another 'first band on' luxury soundcheck at Festival on the Farm, a small festival on an organic farm that we played a couple of years ago - it's expanded to two stages now, and although it hacked it down with rain most of the day, we enjoyed it thoroughly and went down a storm - again, some very nice photos, courtesy of Graham Bradfield.

The day after that, we were at the other end of the bill finishing off the Saturday night at the Priming the Pump festival at the White Horse Country Park. After the Village Pump Festival had to sadly shut up shop last year, following a few years of financial problems, a team of volunteers decided to try and get the event back onto a stable footing and get it back up and running at the old, original site in Stowford, so they set up this as a fundraising weekend where all the bands played for free and it seems to have been a great success - certainly was from our point of view, our most up-for-it audience of the year so far, and we've since heard that they raised their target funds and it will happen at Stowford next year, which is brilliant news. Cheers to Dave Pegg for the photo!
We'd been relatively lucky with the weather up till now, but with the English summer being what  it is, that couldn't last, and sure enough the following weekend it proper bucketed it down for Farmfestival Somerset, which made the logistics of getting around site a bit sticky to say the least. My guitarcase is still covered in mud. A splendid gig nonetheless, with the usual sterling work on the desk by Doug and Eli and co., although a couple of monitor wedges died during our performance, due I suspect to the constant stream of water flowing through the hole in the marquee just above them... Nearly everyone else in the band buggered off after the gig, defeated by the rain, but I took the opportunity to stick around and see some other bands, and perhaps sip delicately on the odd ale as well. I'd been looking forward to camping at this one, but in the event it was too wet to contemplate getting a tent up, so I just kipped in the boot of my car. Woke up feeling as though I'd been run over by it...

The rain hadn't gone away by the time our next date, at Sunrise Celebration, rolled around midway through August, and our original plans to make a weekend of it were rapidly changed to 'do the gig and go home'... a shame, because this was a wonderful site, in the rolling hills and woods of Herefordshire, and a great event, a 'proper' festival that took me back to some of the ones I used to go to back in the heyday of the Free-Festival movement. Very relaxed and welcoming vibe, and the crew of the Cat's Cradle stage where we were playing were as nice as pie. We did have a bit of an issue with the stage drumkit, which was missing a floor-tom because the sound guy had forgotten to pick one up, but DFP's 'make do and mend' attitude came to the fore and he bodged one up out of a spare rack-tom and some cannibalised parts, so all's well that ends well. A really good gig as well, perhaps the rain helps sometimes, as it drives everybody in closer to the stage!


Next up, it was beer time, at Frocester Beer Festival - there could hardly be a greater contrast with Sunrise, really, a very different crowd indeed, who mostly just want covers bands playing stuff they know. As long as it includes 'Sex on Fire'... The band on before us were a case in point - a very tight covers band who delivered exactly what the crowd were after.
We've done this one before a couple of times, and it always goes well for us, because I think although they don't know our songs, they're fast and dancey and accessible, and by the end of our mid-evening slot there was a good crowd dancing and we were thoroughly chuffed with it. The next band on were a young 3-piece from London, who I assumed would be another covers outfit, but as we got ready to head off into the night it became apparent that they were doing original material, in a Nirvana-ish grungey vein, and to put it mildly this was not going down well...
I later heard that they'd walked off stage after half an hour, and the sound guys just put a CD on for the rest of the night. I feel sorry for them, as this was clearly a case of bad programming by whoever sorted the lineup. I daresay they'll play it safe next year and it'll be wall-to-wall covers, more's the pity.

The next night was a considerably livelier one for us, playing at the Bell on the Common, Chris and Ruth's local village pub which was reopening after a refurb - an already up-for-it crowd got progressively more so as the night wore on, and we even had a few mikestands go over, plus a couple of dancers falling over the monitors and into the drumkit, been a while since we've seen that! Great sweaty fun, and not a cover version in sight...

Last festival date of the year, and it's the very lovely Beese's Riverside Bar having their annual beer festival - new owners since we did it last, glad to see they're continuing the tradition. we had an early evening slot this time, and the Friday night crowd were a little thin on the ground it must be said, probably due to the rotten weather forecast. The rain stayed off though, and the sound onstage was extremely good, so we had a good time anyway!
A couple more indoor gigs to go before Christmas, but that's about it for 2017... now to start applying for the 2018 festival season... :)
Posted by slylittlei at 4:27 PM No comments: