Excellent gig at Mr Wolfs down in Bristol's sweaty and heaving city centre last Friday, and it certainly showed us the difference between a weekday night in this fair city, when people still have to get up for work, and the start of the weekend, when nobody gives a flying one...

Support tonight was from a lovely gent name of Madi Stimpson, who plays astonishingly accomplished guitar, varying from jigs and reels (hard enough to pull off on a fiddle, but on a guitar, really something) to full-on Gypsy Jazz stuff that has the guitarists in the audience scratching their heads and wondering why this guy isn't playing bigger gigs... he's ably assisted by Paris Moon on bass - apparently this is one of her first gigs - she's very young, and very nervous, but she played incredibly well, and as I said to her afterwards, if you're playing that well after only a couple of years, the sky really is the limit. She's already got the hang of playing with fingers rather than a pick, which I long ago decided was beyond me, and I've been doing this for 30 odd years...

T'was lovely to see a load of old mates turn up, plus a lot of family, including one of Chris's daughters and one of Ruth's as well (if we're still doing this in a decade's time, I hope my boys will come and see us as well - take note, lads, if you're reading this in 2024... )
A great gig for us, anyway - people leaping about and sending mike-stands flying after the first song, and it went even better after that - big shout-out to the sound man Simon at Mr Wolfs, who really does know his PA rig, and how to deal with bands as well - it shouldn't need saying, but at some venues we've done in the past, the band gets treated as second class Citizens who interrupt the smooth running of the place; Mr Wolfs doesn't make that mistake.

Looking forward to going back, if you'll excuse the possible oxymoron...
﻿﻿﻿
Posted by slylittlei at 4:57 PM No comments: 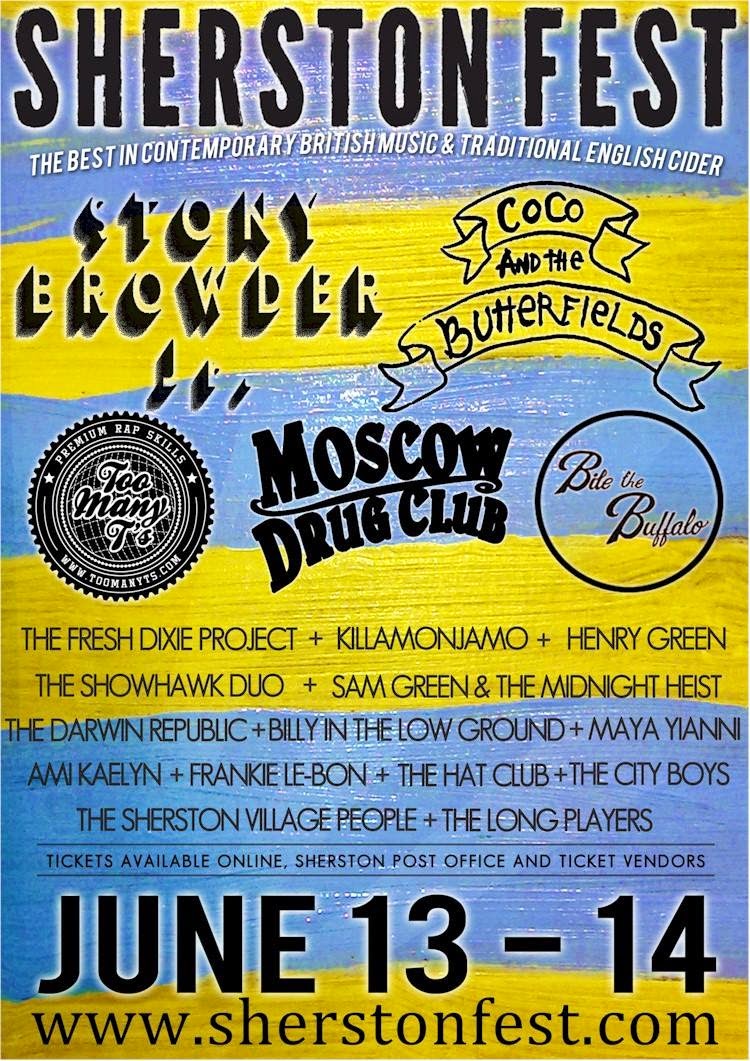 And what a gorgeous day for it as well!

We used to do the Sherston Festival way back in Brew Band days, when the stage was just a curtain-sided truck, and apart from a bar, that was it. It's come on quite a bit since then, and although it's still in the same place it's now a properly organised two-day event with a decent outdoor stage and a second one set up in the adjacent Village Hall, lots of stalls, beer tent, plenty of food and of course a lot more bands. Nice to see it was all original music too, and they hadn't gone for the easy option of covers bands.

We had our fingers crossed for the outside stage, but it was not to be, and we were on the indoor one, which would have been fine for an acoustic act, but to be honest was not great for us - it was a great barn of a place with bare stone walls, and every note reverberated around till we could hardly make out what we were doing. The excellent soundcrew had their work cut out for them, and were probably sweating as much as we were under the lights, but they got it sorted alright, and we went down a storm in the end. If every festival we do this summer is as hot as this one though, we're going to be shedding pounds by the end of the season, which is probably no bad thing. After us on the outside stage were a band called Sam Green & the Midnight Heist, who were great - think we're doing another festival with them later in the year, will make sure I check them out again. Honourable mention also to the reggae band who were on there before we started, I don't know who they were, but they were excellent.

Kudos to the organisers for a very well-run do, and thanks also for the goody-bags they gave all the bands - mine contained sweets, bubble mixture, Rizlas, lighter, bottleopener and a miniature bottle of Jack Daniels - they know their musicians well, obviously..! ;) 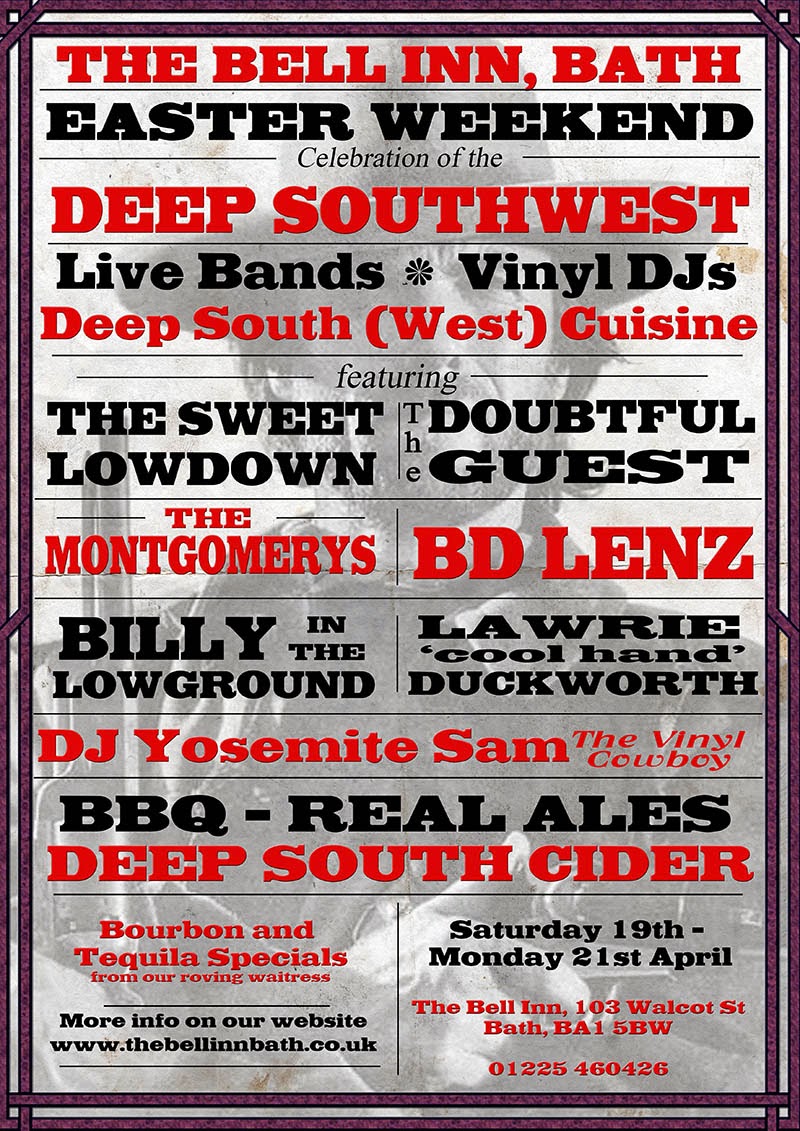 Well, it's been a while, so lets deal with these in order, shall we?
The Village Inn in Nailsworth was a blindin' gig, despite the Papal Election being a bit of a damp squib compared to last year - come on people, I could have come up with a better Hustings speech than any of you proposed Pontiffs in five minutes - put some effort in! I wouldn't be surprised to find out the Pope of Nailsworth has been Defrocked by the time we next play there...
Massive thanks to the stalwarts behind the bar, though, who kept us fuelled with free beer all night - THAT'S how you get the Party Started, folks..!

After that was an all-dayer at the Bell Inn on Walcot St in that there Bath - always a fun gig, despite the rather weird stage setup which causes a few sound problems, but these were ably sorted out by the resident noise-boy, and it turned out nice in the end. The new manager also didn't complain about the volume like the old landlord, which was a nice change. The following week he hit the headlines for ejecting the odious Nigel Farage from the pub after he tried to use it to hold an election meeting in, so our respect for him has shot up several notches further - well done, Sir!


Next on the list was a last-minute request to play a Cider & Sausage Festival at the Southbank Club in Bristol - we like cider, and we like sausages too so why not, we thought, and it was a very good decision. We'd never heard of the place before, but it turns out to be a big old club in South Bristol with a nice-sized stage, PA and lighting rig. We were supporting the excellent Flash Harry, who've been playing around these parts for even longer than we have, and it was a pleasure to do. The event was organised by the Bristol Cider Shop, a magical emporium on Christmas Steps that dispenses all manner of appley goodness... check it out if you're ever in that area.


Finally in May, I found that my 50th birthday had sort of crept up on me. Not being one for throwing parties (too much effort and clearing up in my view), I was hoping for a local gig to turn up, and happily there was a night free at the Oxford in Totterdown, which was perfect.
I had a great night, don't know about anyone else! Lots of beer, some good mates, and thanks to DFP an enormous pork pie - that's a Night Out, that is..!
Posted by slylittlei at 4:53 PM No comments: