To Salisbury on Saturday for the 30th Beerex Beer Festival, which turns out to be in a rather impressive old church converted into an Arts Centre. For the second gig in a row we've got a nice big stage to play with, complete with a massive arched stained-glass backdrop, featuring a bloke with long hair & a beard (clearly pissed, who's lost most of his clothes and fallen into some brambles), draped over a sort of wooden cross thingy while a lot of people look at him disapprovingly. I mean I'm flattered, obviously, but I wish they hadn't gone to so much trouble...
Lots of time for a soundcheck for a change, and for such a huge venue the sound is actually not bad at all - someone who knows something about acoustics has put some effort in here - and our godless heathen racket eventually wins over the sizeable crowd of almost exclusively male beer drinkers, even dragging most of them away from the tantalising array of over 60 real ales on offer.
I only spotted half a dozen women in the whole place; one asks us if we can play some old style Rock'n'Roll (we could, but why on earth would we?), one tells us that she's "acshewully the fire schteward...so it'sh my reshponsibility to, umm, you know, shave everybody's livesh if there'sh a fire...", and one mistakes me for Bill Bailey - a comparison I'm happy to go along with, given that I've recently been compared to Rasputin & Satan...
Many thanks to Salisbury CAMRA for asking us to play, we had a blast, and much appreciated all the lovely beer they gave us to take with us, too... I polished off my Old Growler as soon as I got home. Mmmm...
Posted by slylittlei at 10:39 PM No comments: Links to this post


Video of Billy in the Lowground @ the Prom last month, courtesy of Martin Moss, though the ham-fisted editing is all down to yours truly... cheers Martin!
Posted by slylittlei at 6:06 PM No comments: Links to this post 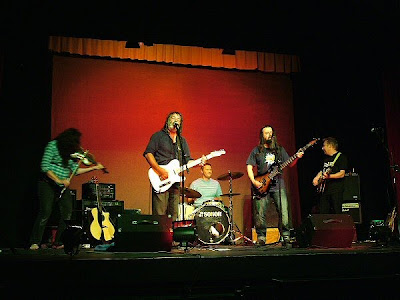 This gig was booked several months ago, long before anyone knew what dates Ingerland would be playing matches in the World Cup (or indeed whether they'd even qualify), so it was with a familiar sinking feeling we noticed it clashed with their first game against the USA... oh well, we reasoned, there must be loads of people in Shaftesbury who would rather see us than a bunch of overpaid pillocks ruining a perfectly good lawn, mustn't there?
The venue itself is great, a nice theatre with a huge great stage, loads of lights, backdrops, and a backstage area with a table containing several empty bottles and a pot of Geraniums. Clearly someone has got confused over our rider, which I'm sure specified several full bottles of Guinness? We make the best of it however, and eat as many of the Geraniums as we can manage, apart from Chris, who has a pathological aversion to salad.
Meanwhile, the very apologetic and charming organiser confirmed our fears that ticket sales had been "disappointing"...
Seven, to be precise. We counted 'em in, and every so often Chris got the excellent lighting man to light 'em up so we could check none had escaped. Never mind, it's quality, not quantity that's important, and for 7 people they did a damned fine job - we really enjoyed ourselves. Particularly nice to see Elodie from the Plough at Manston there with Dave, the Man in a Hat, to whom many thanks for the great photos..!
As we packed the van up at the end of the night, several grim-faced men in England shirts wandered past, muttering something about a "complete bloody disgrace..." Apparently, a huge audience is no guarantee of a good gig!

http://www.maninahat.com/
Posted by slylittlei at 5:07 PM No comments: Links to this post

Back to the Prom in Bristol again the other week, which has had a few improvements since last we played there - the stage has magically expanded (unless we've all shrunk, which is a worrying possibility), and the PA's been overhauled; we were under strict instructions not to break it...
Sound was as good as ever, but unfortunately we outnumbered the audience for much of the evening, which is a good thing if it all descends into an anarchic punch-up, but since it didn't we were a bit lonely up there...
Anyway, many thanks to those hardy souls who did make it - next time tell your friends!
Posted by slylittlei at 9:37 PM No comments: Links to this post