Cracking gig at Mr Wolfs in Bristol last Saturday - support The Dirty Roger were highly entertaining, reminiscent of Captain Beefheart I thought, and they even had someone wearing a bear's head on stage, I have no idea why. Good stuff.
A completely rammed venue for us to play in front of, all leaping about like mad things, which inspired Mick to leave the cosy environs of the stage to go a-wandering through the crowd; a move that nearly backfired as he rapidly disappeared in a melee of dancing bodies, several of whom appeared behind me on the stage at one point, playing havoc with the effects pedals...
Our newer, rockier material seems to be going down very well, and when they finally let us go & the DJ sparked up, there ensued the now traditional mad scramble in the dark to get the stage cleared of all our gear whilst being danced on by dozens of drunken students - Chris was particularly chuffed when a flushed & panting young lady told him afterwards we were 'awesome'... must have been loud too, my ears were still ringing on Monday!

Just to ensure permanent hearing damage, went to see Opeth at the Carling Academy last night, and very good they were too, although the venue doesn't exactly cater for those of us of short stature - unless you get a good spot early on, you can't see a damned thing all night... it's an early night too, as the music finishes at 10pm so DJs can start - I was trying to explain this to two baffled Dutchmen from support band Cynic afterwards, and it didn't make much sense to me, either.
Took this photo of the army of roadies clearing the stage, thinking wistfully - one day, one day..! 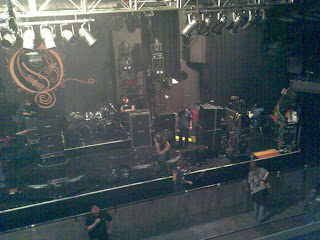 Posted by slylittlei at 2:58 PM No comments: Links to this post

Stumbled upon this in Flickr after following links from the highly addictive site below - it's Martin's SuperVega at Glastonbury, the year we all tried to become freelance beer entrepeneurs! It didn't work out so well, as we broke the cardinal rule about getting 'high on your own supply', and also got taxed by the Angels, who were the 'official licencees'. Well, we weren't about to argue with them...
At the end of the festival we had to be towed out, and as I was the most susceptible to suggestion due to the various chemical inbalances in my brain at the time, I was sent under the bus with a towrope and an earnest plea from Martin to Not Attach It To The Front Axle! After lying in the mud giggling for a while, I attached it to the front axle & swam out.
Amazingly we made it off site relatively intact, barring an unfortunate incident with a sidepanel - I don't think Martin stopped shaking for days, though.