Once more I've let things slip... a very busy few weeks, kicking off back in April with Simon's first gig with us, a private do for the local Moto Guzzi owners club over in Pewsey, on a horrendously wet & windy evening. We arrived to find dozens of beleaguered bikers attempting to prevent their tents and personal effects from flying over the fields, but at least the barn we were playing in was solid and watertight, and a good time was had by all. Didn't envy them camping out overnight though...

The next weekend was another visit to the Horseshoe Inn in Bowlish, where after careful consideration of what happened last time, I elected to drive there and back, and thus avoid the temptations of the cider festival they had on. Probably just as well, on the whole. I like cider, but it doesn't agree with me. In fact it disagrees so strongly I've been known to pick fights with myself after a few pints of the stuff.

The following weekend, we were back in the Plough in Manston - not been here for a while, and I swear it's in a little Bermuda Triangle or something... it took me 2 hours to find my way there from Bristol... perhaps it's time to get a SatNav after all. Always a nice sound in here and a good response, though Simon took some convincing of this, being unused to the genteel crowd of diners that are always there when we arrive, many of whom admittedly don't have the look of avid folk-rock fans... turned out nice as always, though, and good to see Elodie and Mildly Alarming Dave there again.

Up to the end of May, and a ridiculously short set at the 2nd Lechlade Festival - 20 minutes, which hardly seemed travelling all that way for really, especially as the baking heat had rendered the Sunday afternoon audience, such as it was, pretty much comatose. The only shade on site was provided by an enormous inflatable Bar the size of a swimming pool, which promptly collapsed when the generator pumping in the air failed. Cue rapid exodus of punters as the roof sagged down and left the whole structure looking like a stranded jellyfish... they finally got it up again after about an hour, whereupon it collapsed again halfway through our set. That's progress for you. 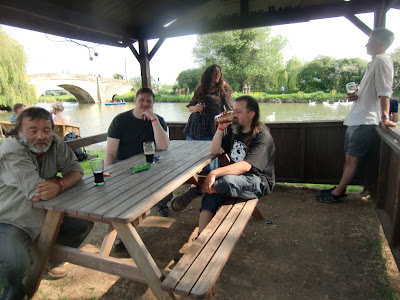 On the plus side, we did get some much-needed decent photos out of it, and we got to slip off for a pint at a lovely riverside pub and watch teenagers tombstoning off the bridge, narrowly avoiding swans and boats... ah, the folly of youth!