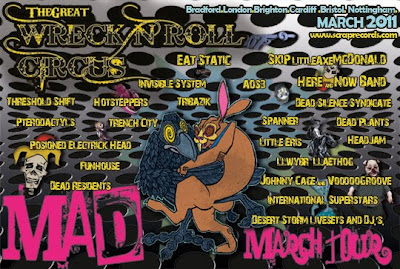 I think the last time I saw Here & Now was at Treworgey Festival back in 1989, so a gig in Bristol was not something I was going to miss, even if it was an all-nighter I knew I'd be paying for later...
The Wreck 'n' Roll Circus is a loose, touring collection of bands & DJs that reminded me of the old Club Dog back in London. The venue was an eclectic jumble of rooms in an old warehouse in St Philips, most of them playing host to DJs playing some ear-splitting variant of Drum & Bass. A mostly young crowd happily did whatever people do to Drum & Bass, while those of us who'd come to see Here & Now (easily identifiable on the whole) cowered in relatively quiet corners, nursing cans of Red Stripe and hoping the babysitter didn't ring.
The bands kicked off with Disorder, a lumpen punk band who proved that Punk is, if not dead, then nodding in a daycare centre with dribble running down its chin. I wandered off to another room to listen to some Jungle, they were that bad.
After that, Spanner were a breath of fresh air - basically a young, angry Culture Shock with a trumpet, they played tight, politically charged ska-punk, only slightly denting their 'Sticking it to The Man' stance at the end of their set when, in response to calls for more, the guitarist asked: "Errr... do we have time for another one? Anyone in authority out there..?"
Next up was Skip (little axe) McDonald, an instantly likeable Jamaican gent with an electric guitar and a host of effects pedals, which was great for a while, but it went on a bit to be honest. So much so that Here & Now were setting up behind him and he still didn't take the hint. So they started playing along with him... great, he thought - a backing band! Eventually he relinquished the stage (I was half expecting a long shepherds crook to appear from one side to assist) and it was Here & Now's turn.
What with the inevitable changeover delays in a show like this, especially one with an authentically shambolic free-festival vibe, it was now 1.30 a.m. and waaay past my bedtime but that didn't matter as the band kicked off with the instant wall of noise that heralds 'Floating Anarchy', and we were off - a great set, packed with songs I know and love, from 'Ali Baba' to 'So Glad You're Here', and of course 'Opium for the People'...
I spent the entire set leaping around in my prime position by Keith's bass bins, and haven't enjoyed myself so much in years! 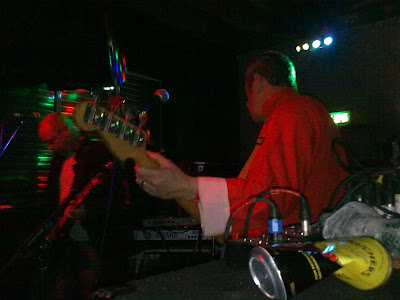 When they'd finished it was 3 a.m, and time for me to call it a night. Lots of stuff still on the bill, but I was knackered. It seemed to take forever to find my way home, but I was still surprised to see it was 5.30 when I finally stumbled in. I only realised the next day that the clocks had gone forward...