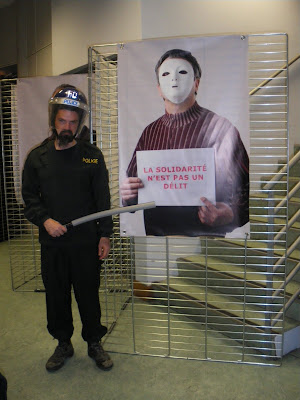 They love a General Strike in France, but here's a sight guaranteed to put the wind up the most militant of agitators - it's Monsieur Sarkozy's new secret weapon... the Juggling Riot Police! Capable of wielding 3 batons at once to devastating effect, these crack troops are ready to swing into action at a moments notice (provided they get at least 2 hours off for lunch, obviously), and it's rumoured they may even be deployed in London for the G20 Summit (the Wombles are reportedly quaking in their boots).

Solidarity is not an offence? It is now...

Posted by slylittlei at 4:37 PM No comments: Links to this post

Oh, we do like to be beside the seaside... 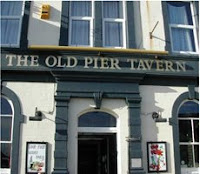 Ahh, Spring is upon us! The daffodils are nodding in the verges, crocuses are peeping bashfully from the lawn, and tiny woodland creatures are scurrying about doing unspeakable things in the hedgerows… I think we ran over a fair few on our way to the George in Bradford a couple of Fridays back, where we proceeded to aurally assault the assembled throng, or as many of them as we could see either side of the place’s central pillar, anyway – there’s an archway either side, through which heads will poke every so often, like meerkats on sentry duty. Apparently the new landlord has plans to remove it to open out the view - hopefully he’ll get a structural engineer to look at it first, as I have visions of one good blow with a sledgehammer bringing the entire pub down like a house of cards…

Last Friday’s venue in Burnham on Sea was a very different kettle of fish – Burnham is rather like Weston Super Mare's little brother, and gets similarly chock full of holidaying Brummies in the summer, but off season it's pretty quiet, apart from the occasional explosion of violence - shortly after we arrived, someone took an involuntary dive through the plate glass window of the supermarket over the road - of course, this may just have been a somewhat misguided attempt at a ramraid, but we put it down to youthful high spirits...
The Old Pier Tavern sounds like a cosy seafront pub, but in fact turned out to be a vast great Victorian pile that’s been heavily modified for live music; nice big stage, lighting rig, dancefloor, decent PA, video screens, the works. It’s run by the very entertaining Jamei Roberts, ex-drummer for Mungo Jerry, and a splendid gig it was too – looking forward to coming back.
Posted by slylittlei at 5:23 PM No comments: Links to this post