A Sunday night outing this week, back to the Raglan Arms in Weston Super Mare, a splendidly woodsmoky little boozer full of er, colourful characters including the gent in a full suit of armour made out of cardboard (we didn't like to ask), the cartoon drunk who apparently is going to get us a spot at a certain major folk festival (no he isn't), and the rather confused chap who thought Mick was playing a Mandarin...
Good sound in here this time (it was a bit ropey when we did it last year!), and a great crowd too, thanks to Dave the promoter, who also took the photos plus a vid which you can see on Facebook.
A cracking night, especially for me, as every time I went to the bar I got a free pint! It later transpired that no-one else in the band had, so I'd probably drunk the entire band's rider. Oops. 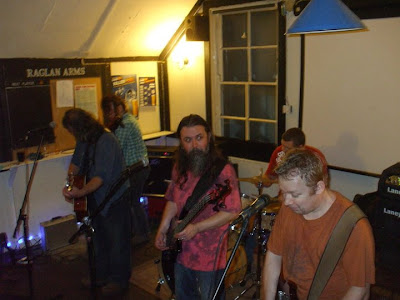 There must be something about this part of the world that breeds strange fancies in the minds of the inhabitants; the sea air, perhaps? Last time we were in these parts we met a deluded bloke who claimed to have been Hawkwind's bassplayer (at a time when anyone with even a cursory knowledge of their history knows it was Lemmy), and this time as we were loading the van a staggering inebriate who claimed to be Paul Weller's Tour Manager appeared, and tried to get us to come back to Burnham with him and meet Paul at his studio - either he was telling the truth, or he was angling for a lift home. I know which one I'd put my money on...
Posted by slylittlei at 4:52 PM No comments:

We're back! As our last two gigs of 2010 were cancelled at the last minute due to the snow, the whole band spent the Christmas period in a state of hibernation, cosily snuggled in packing crates stuffed with straw in the shed. After all, as our nauseating Government constantly reminds us, we're "all in this together". I still don't see why we couldn't have just gone home, though...
Strange how snow doesn't seem to affect the touring plans of umpteen Scandanavian Metal bands, forever yomping to and fro across the frozen tundra... they even have festivals in it, that's how Metal they are. Clearly we are weak.

Still, there are positive signs appearing in this bright & shiny New Year. I've just doubled the value of my car, by the simple expedient of filling it up with petrol and putting a new tyre on it, and the gigging calendar is showing a few tender green shoots of recovery from the traditionally fallow winter.
First gig of the year, then, at the Plough in Manston - always a favourite, but to be honest we weren't expecting much of a crowd on a freezing Friday night, which meant the large & enthusiastic turnout was even more of a pleasant surprise - thanks to everyone who came, especially Elodie & Mildly Alarming Dave (and thanks again for the photos, Dave!) - sounded great (to us, at any rate), and cheered us all up a treat.
On Saturday morning however, there were sure signs that we haven't done this in a while: levels of earwax had built up to Father Jack proportions overnight, and someone was apparently hammering a steel log-splitting wedge into my skull. So it goes, so it goes...
Posted by slylittlei at 6:18 PM No comments: