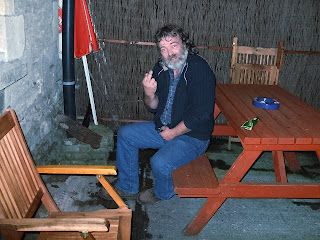 No, it's not actually Santa giving a cheery greeting from his grotto, but Chris 'enjoying' a half-time fag outside the George, Bradford on Avon last Saturday. As you can tell, he's not overly keen on the new smoking restrictions... thanks to Gretchen for the pic - I think you were wise not to sit on his knee, though.

Inside was cosy & warm, and it was good to see a lot of familiar faces who braved the filthy weather, and also to meet Ruth, who knows more about the band than we do, including the words to all the songs, which may well come in handy if Chris keeps forgetting them faster than he writes them. A cracking gig, despite a migraine, a bad back & two different strains of flu (and that's just between the 5 of us in the band).

Back to Broughton Gifford for late night beers & JDs, while the rain hammered down unnoticed outside - until the next morning, when I splashed blearily up the path to my car, slithered in & headed out towards Atworth, with a bow wave in front of me & weird glugging noises from the exhaust... oh dear. Took quite while to find a navigable passage out, and I half expected to see Mick's narrowboat overtaking me. 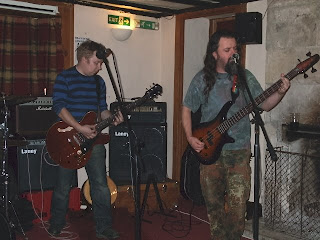 Here's another of Gretchen's pics of the gig - the only one I could find where we don't look like a bunch of old winos. OK, maybe that's a stretch. 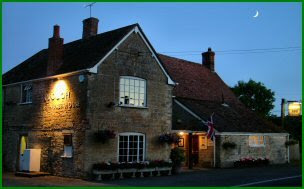 And so once more to the Plough in our favourite corner of Dorset, albeit a very difficult to find corner, at least when you take the admittedly rather perverse route I took. The usual mixture of local musos and farmers await, and as ever it's a good 'un. Unlike the place last week, the locals do know how to call for more, even if they sound like a cow in calf when they do it (according to Chris anyway, and he should know - he can do things with a calving rope that would make your eyes water). All credit to them, as their numbers were much reduced by a virulent plague that had most of the village in bed with a hot waterbottle & a lemsip, apparently.
Of course that could just be what they told us, in which case full marks for tact! We used to play at a pub in Bristol many years ago where the guv'nor had a knack for puncturing any bubble of optimism (or indeed will to live) we might have brought with us by dolefully announcing: "Course, there won't be many in tonight... they all came out for the band we had laaast night - fantastic, they were..."
Posted by slylittlei at 4:55 PM No comments:

After the roaring success of our last gig at Mr Wolfs, this one was bound to be quieter, especially as we're minus one tonight, Mick having a prior commitment.
Always a rather sedate venue anyway (feels more like playing a piano recital in your auntie's sitting room than a pub gig) - I've never seen anyone actually get out of their chair....
Also there's something up with the wiring, so every time I plug in my bass amp it starts seething & hissing like a basket of cobras. Ho hum. Still, there was a bigger crowd than usual and they obligingly stick around... pity no-one asks for any more until we've more or less cleared the gear away - you haven't worked out how this encore thing works, have you people?
Posted by slylittlei at 5:07 PM No comments: