And so Old Father Time has finally shuffled off this mortal coil & we're in a new decade... or is that not until 2011? Who cares. Anyway, after the enforced 'rest' of Christmas, with all it's attendant pigging out, debauchery & general licentiousness, Billy in the Lowground are back in business!
Drummer Nick has at last recovered from his appendix malfunction, and is champing at the bit to get hitting things with sticks, so it was off to the Bear Hotel in Devizes last Friday to frighten the local jazz enthusiasts again. To be honest we thought we'd be playing to nobody, as there was still snow all over Wiltshire & more was coming down, but a very respectable crowd turned out to see us, which was very gratifying - thanks to everyone who came for braving the icy pavements & making us feel so welcome, it was much appreciated, and apparently we'll be back in April sometime... looking forward to it! 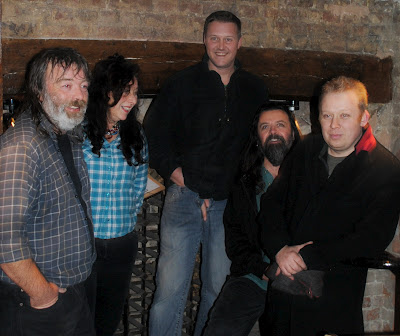 Oh, and Nick promises to keep it in his trousers next time... drummers, what can I say?
Posted by slylittlei at 6:21 PM No comments: