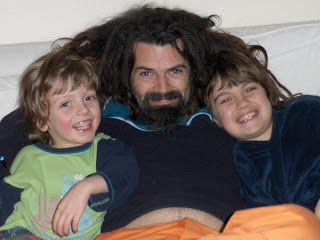 Not much to report on the gigging front over the traditionally dead fortnight at the year's end, apart from the worrying news that Chris is writing a Christmas song! With any luck he'll have forgotten all about it by this time next year, but just in case: I am NOT going to dye my beard white and wear a silly hat. Again.
Another New Year's Eve spent trying out inadvisable combinations of drinks in front of Jools Holland and his infernal boogie-woogie piano, whilst thinking about how I'd like to slam his head in it repeatedly...
Great to see Gavin over from France again though - 8 years is too long, we need to get better at staying in touch! He was a big hit with his nephews, too - it's something of an unfair advantage for an uncle to be so good at magic & juggling - he went back to France laden with English, er... delicacies to tempt the French palate, and keen observers will notice evidence that seasonal excesses have taken their toll on his waistline. Clearly it runs in the family, and there's therefore no point in trying to fight it.
Posted by slylittlei at 4:41 PM 2 comments: Links to this post