"The stunning fiddle playing of Ruth Behan and the passionate vocals and songs of Chris Hibberd have made Billy in the Lowground the premier Celtic Rock Band in the South West" it says in the festival programme. Blimey, we'd better be good then!
It's a Wednesday night, and it's drizzling steadily as we pull up in Devizes at the Bear Hotel, next to the Corn Exchange (scene of some memorable gigs for us in the past, including a riotous support slot for John Otway, who nearly broke his neck attempting to play a doubleneck guitar on top of a stepladder). This gig is part of the Festival fringe, and is in the 16th century cellar bar - the entrance is a tiny black door with bars over the window, at the bottom of a vertiginous flight of steps. It looks like an oubliette that Cromwell might have thrown a few enemies of the State into, and really ought to have a hideously disfigured hunchback as doorman, but thankfully once inside it turns out to be a fantastic little subterranean jazz club, all wood & stonework, which were it not for the new smoking laws would be full of Beatniks in berets puffing away on french cigarettes.
Indeed, it doesn't take long to fill up completely - by the time we start our soundcheck the place is rammed, and we get going with a sense of trepidation - are these people expecting a jazz band..? Oh dear... happily though, they've all actually turned out to see us, and from the very first song we can tell it's going to be a good 'un. Weird sometimes how your first impressions of a gig get completely stood on their head - best reaction we've had this year I'd say, and we played all the better for it - thanks people, we needed that!
Posted by slylittlei at 10:38 PM 2 comments: 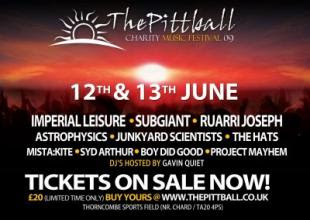 First of all, many congratulations to Mick & Paula on the birth of baby Bethany last week! The trauma of this life-changing event was such that Mick has been rendered incapable of playing guitar for the next few weeks. This is what happens if you let your partner squeeze your hand (or anything else) in a maternity ward; mine still throbs a bit when the weather turns cold.

So, off to the Pittball festival, a two-dayer in a field near Thorncombe, as a 4-piece: we arrive on Friday night to find the site shrouded in dense fog, a huge stage with lasers everywhere dimly visible in the fading light, and droves of Young People in their best leisurewear wigging out to ear-splitting drum & bass. A bunch of young lads in hoodies and very clean trainers doing the Pimp Roll around Bristol city centre is something I generally cross the street to avoid, but there's something rather endearing about the sight in a field...
Not so endearing by 2 a.m. though, when the deafening dubstep finally grinds to a halt and the merry revellers finally stumbled off to bed. I'm not actually sure it was dubstep - it might have been drum & bass still - to be honest I was past caring. Basically it seemed to consist of a machine making squelchy noises, another making squiggly bleeps, and a bloke with a volume fader who kept turning it down momentarily to exhort the crowd to "Make some f****** noise!!!" I dunno, the youth of today...
Oh, and what a joy it was to see their tousled little heads peeking blearily out of their tents the following afternoon as we started our set on the main stage! Like an army of hungover tortoises, baking in their canvas shells & croaking piteously... those that were awake seemed to like it though, and it was lovely to have a decent sized stage to play with for a change, even though we had to be careful not to trip over the hordes of people with video cameras that suddenly appeared - we'll have to track that down & stick it on Youtube.

All in all then a cracking weekend - well organised too, with acts on a smaller stage that got going as the main one finished, so there was always something going on. No covers bands, either, which made a refreshing change for a small festival - well done to the organisers, and hopefully it made a load of dosh for their chosen charities. 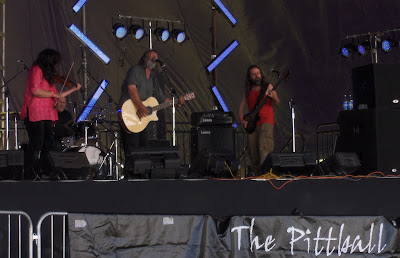 Posted by slylittlei at 11:49 PM No comments: