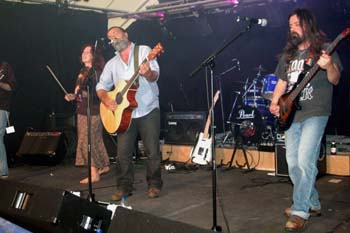 YeeeHarr! Eight thousand sweaty, swivel-eyed drunks in a huge marquee, a proper-job stage at one end, and a dazzling array of over a hundred different beers ranging from the sublime (Coopers WPA, 3.5%) to the ridiculous (Old Freddy Walker, 7.3% - old Freddy fall over, more like) at the other.
My idea of heaven, and quite a few other peoples by the look of it. We were meant to take the stage at 6 p.m., but swapped our slot with the next band. This worked out rather well, as I then had time for more beer (Village Idiot, 4.1%)
Suitably refreshed, we played from 7 - 8 and went down a storm, if I say so myself. It's always a good sign if an audience who doesn't know your songs bellows along with the choruses! Like the idiots we are, we forgot to bring some CDs to put on the merchandising tent, but hopefully we'll sell a few after via the website (http://www.billyinthelowground.com/ since you ask!), as I reminded everyone what our name was after practically every song...
By the time we'd finished, the place was a heaving mass of horrendously inebriatoxified humanity, which it took me a good quarter of a hour to fight my way through for more beer (Son of a Bitch, 6.0%)
Ruth & Chris poured me out of the van later that evening, taking care not to disturb my nice foamy head...

(pic by Mike Lang, www.imagery.org.uk)
Posted by slylittlei at 4:41 PM No comments: