The band's shiny new website is up, and very tasteful it is too.
Still a bit of tinkering to do, but the forum is up & running, and you can download sample mp3 files:
http://www.billyinthelowground.com/
Posted by slylittlei at 11:02 AM No comments: Links to this post

Down with this sort of thing! 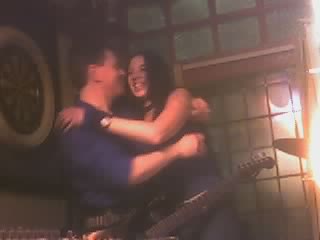 Yet another shocking example in the Old Fox last night of the harrowing ordeals that musicians have to endure in pursuit of their art...
Here, Alan of Angel Up Front (http://www.angelupfront.co.uk/) manfully defends himself in the face of an unwarranted invasion of his sacrosanct personal space (in the middle of a particularly widdly solo) by an eager young lady who later claimed to be "just trying to get to the dartboard!"
"This sort of thing is becoming all too common", a clearly shaken Alan later confirmed: "It's not the reason I took up playing the guitar at all..."
Posted by slylittlei at 9:20 AM No comments: Links to this post