A gap wider than the Grand Canyon...

...between this post and the last one, so much for keeping up to date!
2016 has been an important year for the band, not least as our latest album 'Ticket to Somewhere' finally came out on sale, and we were dead chuffed, not only with the album itself but with the reaction to it - the 'Dancing About Architecture' blog and 'Rock & Reel' magazine gave particularly pleasing reviews, and a track was featured on the latter's 'UnHerd' CD.
The gigging year got off to a slow start, partly due to our concentrating on the album and forgetting to book gigs, but also the traditional post-Christmas slump, but our first outing in February to the Rose and Crown in Longburton was a hoot, especially as our old friend Elodie was in charge there. 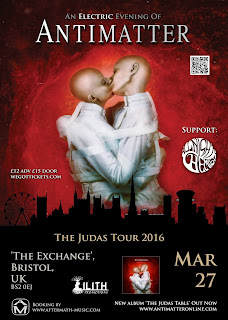 My next gig was a bit different, as it was with my old 1980s band The Allnight Chemists - our first for 26 years! I've kept in touch with Alan the old guitarist, who's been playing with the hardest-working covers band in the South West, Angel Up Front, for years, and also Rich Harding the singer, who has been fronting prog rockers (he'll hate that) Also Eden, and we thought it might be fun to get together and see how much of our old material we could remember. As it turned out, not very much, but with the aid of a few dodgy cassette recordings, Angel Up Front's drummer Stuart and Rich's carefully hoarded setlists, we cobbled together a decent set and promptly landed a support slot with Antimatter at the Exchange in Bristol - this went better than we'd dare hope, despite my determined efforts to cock something up in every song, and we decided to keep our hand in by meeting up regularly and keeping an eye out for a few other gigs. Watch this space...

Firmly jammed back in the saddle of Billy in the Lowground, and April saw a very welcome return to the all-new Mr Wolfs in Bristol - a great venue which has moved to bigger premises just around the corner. Always good sound and a decent crowd in here, and that hadn't changed. The only drawback was that after our set finished to a full house the DJs, as is their wont, cranked up the beats immediately, which meant we had to load out through a huge dancing throng. Turns out that politely asking a saucer-eyed hipster grooving to the latest sounds to "Mind yer back, mate..?" doesn't work - the only way is to plough through them like a bulldozer carrying heavy amplification equipment and see them scatter in your wake. They'll be wondering where those bruises came from in the morning...

April 23rd is of course St Georges Day (no, I didn't know either, but apparently it is so) and that night we played a Medieval Banquet in a tent on Broughton Gifford common, set up and organised by the good people at The Bell on the Common, which was fully as surreal as it sounds.
It was a great idea, but the downside to April in Merrie Olde England is that it's a bit, shall we say, nippy out... the assembled medievally-costumed multitude showed every sign of enjoying themselves, but when they'd finished eating most of them disappeared inside to the roaring log fires of the pub, leaving us shivering minstrels to play to our highly inebriated ex-guitarist Simon and his good lady wife, who were dancing on a table, and the landlord, clad in a complete St George outfit including chainmail. Believe it or not it was enormous fun.

It hadn't got any warmer at night by the next weekend, when we played our first festival of the year, Landed Festival at Rhayader in Wales. This was a new one on me, but a fantastic little festival, on a beautiful site with multiple stages, catering to all musical tastes.
We had a whale of a time, I particularly enjoyed a band called Kilnaboy who came on after us. And the beer tent, I really enjoyed that. Drummer DFP did his best to get me into the Drum'n'Bass shenanigans at the Club stage later on, but I was having none of it and went weaving unsteadily off to my tent, where despite being fully clothed and with 2 sleeping bags I spent possibly the coldest night of my life. Hope this one happens again next year, though I'll be packing my thermals if we go back...

By May I'd more or less thawed out, in time to return to the Southgate Inn in Devizes - another great night in this snug but welcoming pub, and onwards into June we played a double-header with Alien Stash Tin at the Louisiana in Bristol. First time we'd played here in years, and it was a real pleasure, although the mid-week slot didn't do us any favours and the crowd was distinctly thin. Great sound, though!
A lot busier later in the month at the Golden Lion in Bristol for their annual 'Backyard Bash' - a multi-band street party that lasts all day, which we finished off inside - the joint was well and truly jumping, and it was particularly great to have so many old mates come down to Bristol for the night - this one was my highlight so far this year. Some great photos by John Morgan as well:

In July we were in Clivey near Westbury to play the aptly named Cliveyfest, a very well run 2 day charity festival with sofas to watch the stage on, which is a splendid idea
Next on the list was the Village Pump, always a favourite of ours and a real pleasure to do. Once again we found ourselves in the late-night slot on Stage 2 starting up as the Proclaimers finished '500 miles' on the main stage - the space in front of the stage rapidly filled with everyone onsite who didn't want to go to bed just yet, and we rocked the place till 1.30 in the morning, by which time Chris had cast caution to the winds and ripped off his shirt, he was so hot and sweaty... I kept mine on, discretion being the better part of valour...

It turns out that this may have been our last appearance there, not because of Chris's sweaty chest, but it seems the Village Pump is no more. At time of writing we're not sure of the full story, but it seems the organisers have pulled the plug on a festival in 2017, which is a real shame as it was a real landmark on the Festival calendar. That said, everything has a lifespan and there are so many events over the summer now that the Festival Pound can only stretch so far. We'll miss you, Village Pump...
From a nice big stage back to a small one for the Crown Inn in Lechlade next, an idiosyncratic little pub where we went down a storm - expect to see us there again in 2017.


Into August and we returned to the Firsdown Festival, which we played last year - a lovely stage and sound and lights (see the photo below by Terri Johnson) and we played last on the Friday night. This looked like a great slot on paper, but the band before us took so long to clear their gear offstage that combined with a strict 11pm curfew we only got about half an hour playing time. We were all pretty disappointed by this and it marred what would otherwise have been a good night for us. Never mind, you can't win 'em all.

A private party we played a couple of weeks later was great fun, although I felt sorry for the host, whose 50th birthday had been several months before but he put off the party to ensure better weather. Needless to say it bucketed down all night, making the barbecue a bit of a labour of love... everyone had a good time though, which was the main thing.
The following week saw us back at the Golden Lion in Bristol, my new favourite pub venue, but not as busy as last time, probably due to it being a scorching Bank Holiday weekend, and most everyone had gone away. Much kudos to the faithful few who turned up though, and we will be back here before too long I'm sure.

That brings us almost up to date except for last weeks headline slot on the Saturday night of FestiBell, a new venture by the owners of the Bell in Broughton Gifford (they of the St Georges Day Banquet) - a 2 day festival in aid of charities which was great fun and very well run, although as anyone who went to the huge 28,000 people gig by Massive Attack on the Downs in Bristol that night knows, the weather was not exactly with us. It poured down, but despite this, the brave punters splashed about with abandon, and the onstage sound and light was possibly the best we'd had all summer - well done to everyone involved, and pleased to hear it raised about £1300 for charity. Hope they do it again next year, we're certainly up for it!

Posted by slylittlei at 5:51 PM No comments: