Beese's Beer Festival, and the Wurzels!

After a long summer of festivals it's great to finally be headlining one, especially as it's local - the 8th Beese's Beer Festival is held at Beese's Bar & Tearooms by the river in Bristol, the access to which is down a long, rutted track which looks as though it ought to end in a rickety plank bridge over a yawning chasm, but in fact ends at a small but perfectly formed beer & cider festival which is already in full swing by the time we all eventually find our way there.

Well, what can I say? Gorgeous food, lovely beer (Ma Beese's chocolate stout was my particular favourite), and probably the best audience we've had all year - everyone up and leaping around like mad things from the first song, mike stands sent flying (Chris & I nearly lost teeth on a number of occasions), pints sadly lost (Simon lost two in rapid sucession, poor chap), and one woman fell over my monitor wedge at least three times but kept coming back for more...

Here's a brief video clip kindly sent to me by Pete Loft - a bit wobbly, but you get the general idea!
All in all a fantastic night, and I certainly hope we get asked back to do it again next year... getting back up that track in the dark was a bit hairy though, with homeward-bound punters staggering out of the bushes and lurching towards the van like extras from the Walking Dead.
Just as well for everyone's sake that I wasn't driving...


The next weekend we were in Knockdown, at a cider festival run by the Holford Arms, at which the star attraction (apart from the cider) was the Wurzels - we supported them before at the Cheese & Grain in Frome, but this time they wanted to go on first. Suits us, we thinks, and we turn up at 4 pm to soundcheck and then repair to DFP's nearby house for a well-earned refreshment.
All bar Simon anyway, who can't get away that early. He rings at 6 pm to say he's outside the pub, and can see the marquee and everything - where are we?
No worries, I tell him - we've 5 minutes away, see you in a bit.
So we toddle on down to the Holford Arms, but no sign of our Lead Guitarist...
No sign until considerably later in fact, when a rather embarrassed Simon appears, and explains that he'd been at the wrong pub... The Rattlebone in Sherston, you see, had a great big marquee outside for a music festival that they were running that night, and Simon happily swanned in with his gear, asked where to put it, and was directed backstage as per normal. It wasn't until several people had asked him rather pointedly what time he was playing that the penny eventually dropped, and he had to make the Walk of Shame back out of the place with all his gear...

Obviously we all listened sympathetically to this tale of  completely understandable, er, misunderstanding, and didn't laugh at all. Obviously.

Anyway, by the time the paramedics had revived us all with oxygen, the mighty Massey-Fergusson Tractor that is the Wurzels had lumbered into life, and after listening to the 'Blackbird Song' and 'Champion Muckspreader', we were getting a bit nippy, so retreated into the pub, where it was warm and snug and there was beer (the Wurzels were alright; they had heaters on stage as part of their rider. And sandwiches, apparently - they live the Rock 'n' Roll lifestyle 24/7, those lads).
As soon as the last chords of 'I've got a Brand new Combine Harvester' died away, we started our set on the other stage, and with 500 cider-fuelled punters eager for more dancing we could hardly go wrong - a great night, and we were all still buzzing in the wee small hours of the morning; a superb way to play out our last outdoor gig of the year..!

Posted by slylittlei at 5:44 PM No comments:

The last weekend in August, and a brand-new festival to play at!
The Dirty Boots Festival was started up this year as a fundraiser for cancer research charities, and of course that's something we're happy to support, plus it was in Chris & Ruth's home village of Broughton Gifford, so not far to stagger home from either - win-win.

﻿
We were on early evening, so turned up that afternoon to check everything out, and were pleased to find that it was a very well organised and friendly event, with FREE BEER for performers - Glory Be! And very reasonable barprices as well, when that ran out. Which it did, quite rapidly.

Our set went down very well, all credit to the excellent sound & stagecrew, although we were playing into the last rays of the sun, which blinded us all somewhat so we had to be careful not to go wandering completely off the front of the stage... again, we lucked out with the weather, which makes every single outdoor gig this year so far (take note, festival organisers: get Billy in the Lowground to play, and you're guaranteed sunshine, as well as good bar-takings)!
﻿
We stuck around to listen to some of the other bands for a while, but as soon as the sun went down, it started to turn decidedly nippy, and we retired to the warmth of indoors, like the bunch of wimps we are! A good little festival, which will hopefully return next year - it raised £5000 for charity apparently, despite a less than huge attendance.
If I had one suggestion, it would be to lower the ticket prices a bit - that would help with the gate numbers, I reckon. 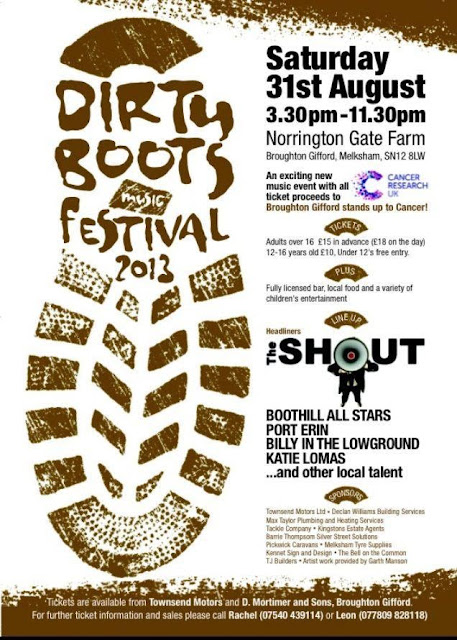 The following weekend saw us back at the Plough in Manston - after such a long run of outdoor gigs it felt a bit weird to be playing in a pub; where was the stage manager? Why aren't there any roadies to lump our gear out of the van?!
It didn't take us long to get back into the swing of it though, and we soon remembered why we like playing here; as usual, it was full of sedate diners tucking into their roasts when we got there, but by the time the food was cleared away and the drinkers came out to play, the place was heaving, and it was yet another barnstorming gig - the landlord must have been chuffed, as he gave us more money than we'd asked for, an unheard of event! We'll be back in the New Year...
Posted by slylittlei at 10:29 PM No comments: