Looking back through these dusty archives, I see we were last here back in 2009, and the rather terse entry was so short, I may as well quote the whole thing:

"Bit of a random question, mate, but if we give you a fiver could you give us all a lift down to Sainsburys in your van?" Thus spake the boldest of the small knot of emo kids hanging around outside the Griffin in Frome as we drew up.
Well, if we'd known then what we know now, we'd probably have taken them up on it.
The Griffin's a nice little pub (little being the operative word) with it's own (micro)brewery attached (lovely beer, by the way), but is plagued by a neighbour prone to ringing Environmental Health if the milkman whistles too loudly in the morning. As a consequence there's a 82db soundlimit on proceedings,which pretty much sounds the death knell for a 5 piece amplified band. In fact death knells usually peak at around 90db, so even this wouldn't be allowed.
Very frustrating for all concerned, and I think it's safe to say we won't be back - sorry Frome!

OK, it's five years later, and I think I can safely expand on that a little... the source of our frustration at the time was indeed the abovementioned Neighbour from Hell, but rather more in-your-face was the lady behind the bar at the time, who had one of those noise-meters shaped like a gun that she was basically shoving in our faces while we were soundchecking.
When the Snaredrum trips the infernal device all on its own, you know there's going to be a problem... Safe to say, things went from Bath to Sausage, as the Germans would say (look it up. Think of it as Homework), and by the end of the evening our lead guitarist Mick had lost all patience with the silly cow and cranked his amp up to 11... I followed suit, as did everyone else, and we left under something of a cloud.

Aaanyway, so 5 years later, the Neighbour from Hell has presumably died from Apoplexy, and the Landlady from Hell has thankfully buggered off as well, so back we are, and it couldn't have been a more different experience! The only similarity to last time is that the beer is still lovely.
This time, the barstaff are also lovely, there's no noise issues (they've cunningly devised a lot of curtain-related trickery to ameliorate what noise there is, as well), we have a large and very appreciative audience, and did I mention that the beer is rather lovely?
We will be back here as soon as I can decently manage it...
Oh, and here is the ad for the gig in The List, which is as nice a summation of what we do as I've seen in many a year, cheers folks! 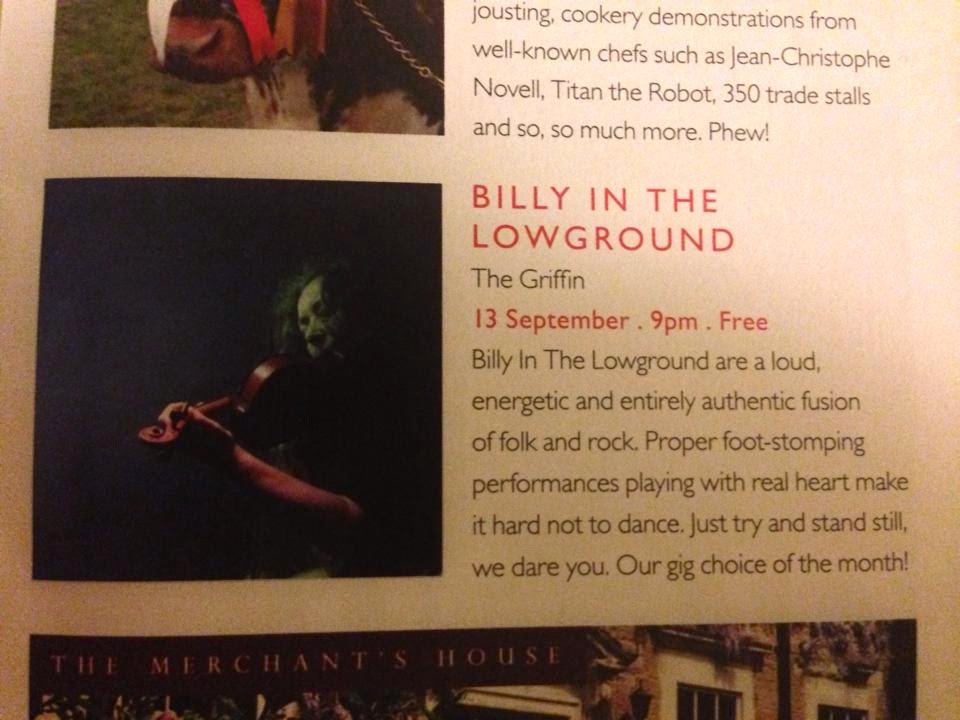 Posted by slylittlei at 1:32 AM No comments:

Our last festival of the summer, this was the 16th Woolley Festival, held on Merkins Farm near Bradford on Avon. This has grown over the years from being a street party held out the front of the (late lamented) George pub, to a much more ambitious event the last time we played it a couple of years ago in a neighbouring field, to this year's huge site featuring several stages, a eclectic line-up of nationally well-known bands and plenty of local acts as well.﻿﻿
We were extremely chuffed to be asked to open the main stage on the Friday night, before Chas 'n' Dave, and well impressed as we rolled onto site and saw the stage - probably one of the largest set-ups we've ever played on, it wouldn't have looked out of place at Glastonbury!

Great to have some room for once, and we took full advantage of the opportunity - excellent onstage sound, a great crew, and got to meet Dave and Joe Brown too, both of whom were thoroughly good eggs. Nice to see Joe has fully recovered, as he was originally supposed to be on the bill for the Village Pump earlier in the year but had to cancel due to medical problems.

We seemed to go down pretty darned well, too, which made it an all-round success for us, after which we relaxed into the cider and ales and watched Chas & Dave (who are much more than a sort of Cockney Wurzels, a terrific pair of musicians with a fine band behind them - a great set, too) and lastly Joe Brown, whose ukelele version of 'Ace of Spades' I particularly enjoyed...

We had another gig on the Saturday, playing at the relaunch of the Rattlebone Inn, Sherston, after their roof caught fire earlier in the year, so sadly I wasn't able to make it back onto site for the rest of the weekend - a shame, as I'd dearly love to have seen the Aristocrats play on a big stage - I saw them at the Fleece a few months ago and they were astonishingly good. Dreadzone by all accounts were superb, and Jesus Jones headlined the Sunday to much acclaim.

Unfortunately by the Saturday night it was becoming apparent that the numbers needed for the festival to break even just hadn't materialised, and organiser Darren was forced to contact several acts including Ginger Baker, Martin Simpson and Courtney Pine to explain that there wasn't going to be enough money to pay them... they cancelled, and a lot of people were of course very disappointed.
I still can't for the life of me work out why more people didn't show up... the line-up was excellent, the weather forecast great and the facilities top-notch. Doubtless this will be the subject of much debate and agonising over the next few months, but whatever the fallout, Darren deserves a huge thank-you from all the local acts like ours he's supported over the years. I know full-well what goes into organising a large Festival, and the list of things that can go wrong is truly terrifying.
Hopefully some lessons will be learned from this year and the festival will return next year... it will be a real shame and a great loss to the area if it doesn't.
Posted by slylittlei at 11:25 PM No comments:

AAaaahhh, August Bank Holiday weekend... traditionally a time for relaxation: a barby in the garden, an alcohol-fuelled fight in the beer-garden of your local, or perhaps a combination of the two..?
We, on the other hand, were at Foxstock - a 4 day music festival at the back of the Fox Inn at Great Barrington on a stage which is erected over a river which runs round the back of the pub - sounds a bit shonky, but the whole thing was run on a very professional basis - great stage, well managed, and one of the best soundcrews we've ever worked with.
Made a huge difference, especially as, due to Circumstances Beyond Our Control, we were minus our lead guitarist that day. We pulled it off as a 4-piece however, and that just means that we've got a bit in reserve for when we do it again next year, which looks to be on the cards...

Weekend after that was another first for us - the Upton Cheyney Chilli & Cider Festival - just roll that around your mouth and savour it for a while, eh?
Being as I am a huge fan of both the aforementioned comestibles, I was salivating at the first mention of this baby, and by the Lord Harry it was a cracker.
The only downside was trying to get our gear out of the barn afterwards into a pitch-dark farmyard, and thence into the van, without either losing anything, accidentally goosing the barstaff * or headbutting the Sound Engineer. Perhaps some lighting next year, Alex..?


*Sorry Lucy, it was an honest mistake. Honest...


Posted by slylittlei at 2:02 AM No comments: