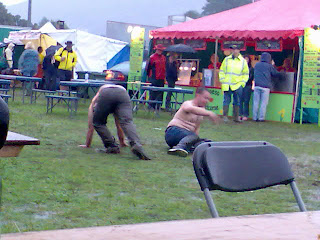 I cut it a bit fine getting here for our 3.15pm slot on the New Music stage, but not as fine as Nick, who got stuck in a jam on the M4 and eventually turned up at er... 3.15pm. I've never been so pleased to see him, as anyone who's ever had to play without a drummer will appreciate! We launched into our set in record time & knocked the socks off 'em, though I say so myself. Just as we came off, all the house lights suddenly went down, and the stage lighting came on. "Sorry," said the sheepish Stagemanager "I forgot..." We'd been wondering about the rather harsh lighting - shame really, as we look a lot better in the dark.
We must have done Ponty at least half a dozen times over the years, and for the life of me I can't remember one when it didn't chuck it down with rain. This year was no exception - by the time I got there on Saturday all vehicle movement was already banned onsite, leaving several well-refreshed gentlemen no option but to get around site by sliding through the mud on their ample bellies (see above). All good clean fun, until one particularly enthusiastic slide ended up at the feet of a couple of coppers wandering the site, who took a rather dim view as they inspected their not-so-shiny-anymore boots and mud-spattered blue serge trousers... cue comedy chase through mud, cheered on by large crowd of onlookers from the beer tent.
Spent most of the rest of Saturday camped out indoors at the New Music stage, which was dry, warm, and had a cheaper bar than the beer tent. Despite these obvious advantages, everyone else at the Festival seemed to prefer sloshing about outside in the mud & rain - more fool them, as they missed the excellent Jocanovic, and indeed the headliners Pressgang, who played a fantastic set to a smaller crowd than we had - I suspect that most people simply didn't know where it was...
Woke up Sunday morning, upside down in my sleeping bag, to the sound of rain drumming on the car roof - ah, the glamour of Rock 'n' Roll...
Posted by slylittlei at 5:00 PM No comments: