The Men They Couldn't Hang, and Lechlade Festival 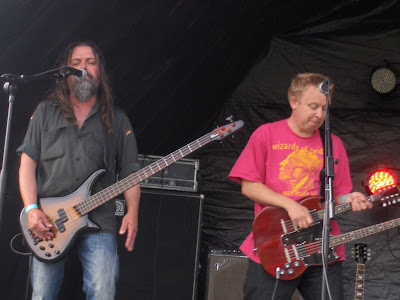 After a prolonged gig drought, two come along at once, or nearly so - both in the same part of the world too, the first being a Friday night support slot with The Men They Couldn't Hang at the 12Bar in Swindon. We did this about a year ago on St Patrick's night, and it's a lovely little venue, with a decent stage & PA and friendly soundcrew. Good pint of Doom Bar, too!
Everything ran like clockwork this time around, and our set went down rather well, I'd say - lots of people saying nice things afterwards, anyway. We'll be back at this place later in the year, I think...

On Saturday, with our ears still ringing, and heads still thumping from the Doom Bar (OK, just mine, then), it was time to head 20 miles North of Swindon to the first Lechlade Festival, set in the Cotswolds Water Park, next to the Thames. Lovely little site, Nice big beer tent, like to see that... (Old Lech at £3 a pint?! At a festival? Oooh yes, I'll 'ave some of that!) A tad wet & windy, unfortunately, with nearly fatal consequences: in a scene reminiscent of The Omen (if you don't know what I'm on about, check the link below), a freakishly strong wind blew up, toppling a scaffold tower draped with banners by the side of the stage, and as the tower fell onto a car parked next to it in the backstage area, a 3 foot-long steel roadpin which had presumably been left on top of it neatly impaled Ruth's metal case, thankfully missing any vital tuners, leads, effects pedals, or indeed fiddle players, which would have put a distinct dampener on proceedings (I could swear I heard a choir reaching a menacing crescendo too, but in retrospect that may have been an aftereffect of the Doom Bar).
Despite the best efforts of the Evil One/scaffold company, our late afternoon set went down very well, in fact when I went back later that night, it was apparent that we'd had the largest audience of the day - headliners Incubus Succubus were playing to about 50 people, which was a shame as they were pretty darn good. The lot before them though, a Glam covers band called Same Old Faeces Faces were... well, you can guess.

Posted by slylittlei at 11:57 PM No comments: