The George, Bradford on Avon

3pm on a sunny Sunday afternoon? Who wants to sit in a dark pub drinking beer at a time like that? Well me, obviously; but as I had to drive to this one, I had to just watch everybody else...
Some gigs everything goes just right - no major cock-ups, no broken strings, Chris even remembered the words to his own songs, and hardly insulted anyone. We played pretty well too, even though I say so myself.
One small fly in the ointment was the distinct lack of audience, but hey, that's never stopped us before. The worst night I can remember was in Germany at a club called Poison, in the middle of a godforsaken industrial estate somewhere near Reutlingen - an enormous P.A., a dazzling lighting rig, and we played to the barstaff. Apparently they didn't usually open on a Wednesday night...
Still, there was a small but sturdy band of the sort of ne'er-do-wells who usually come & see us there, and they did us proud, all except the large alsation who slunk off next door with his ears flat & his hackles up...
To cap it all, the extremely charming Landlord offered us a drink when we'd finished - that's free drink! Which I had to turn down! AAaaghh!
Posted by slylittlei at 3:49 PM No comments:

Nigel & Sandy do it live on the web! 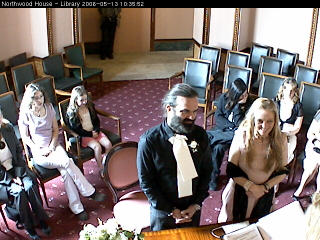 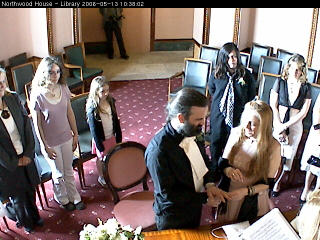 These shocking pictures of real live nuptials are brought to you courtesy of the webcam at the Isle of Wight registry office!
Alex can be seen looming ominously behind them, looking rather like Ozzy without the shades and dispelling once and for all the persistent rumours that he doesn't come out on film (or indeed in daylight).
Just one question though - Nigel, what in the name of all that's unholy is that around your neck?
Posted by slylittlei at 11:47 AM 3 comments: 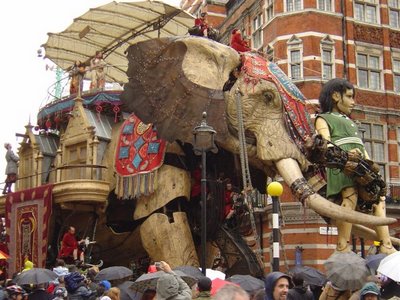 As spotted walking through the streets of London yesterday by Steve Mitchell.
The lengths some people will go to avoid paying the congestion charge!
Posted by slylittlei at 9:40 AM No comments:

At last! Another bloody gig!
We missed the last two because of medical malpractise so it seems like months... oh, er, it is months apparently.
Good to be back in this friendly bikers pub on Saturday - it's always been one of my favourite gigs, not least because I get a lift there & back and thus get to make a thorough pig of myself on the Guinness!
Nothing seems to have changed since last I played here 3 years ago - a nice big stage, and loads of jolly bikers who amiably refuse to fill that big ol' gap in front of it until the last couple of numbers...
My only problem with the night was my hearing - I'm now more or less completely deaf in my right ear, due to an unseemly accumulation of wax. This was caused, I'm sure, by a night a few months back when I went to a Granary reunion (http://www.thegranaryclub.co.uk/) at which I spent the entire night leaning on the bar with an old mate screaming into each other's ears to be heard; is it me, or is music louder than it used to be? I guess I really am getting old...
Anyway, I spent most of this gig with my good ear glued to my speaker, trying to minimise the appalling number of bum notes coming out of it - it's no good, I'm going to have to get 'em syringed...
Posted by slylittlei at 5:15 PM No comments: