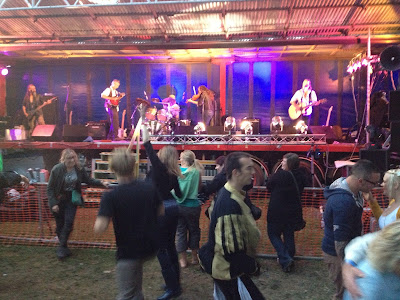 The third time we've played the huge Frocester Beer Festival, and a nice early evening slot with five and a half thousand beery punters ready to rock, splendid!
A leaden sky kept threatening to dampen proceedings as it did on the Friday night apparently, but our luck held, and it stayed warm and dry all Saturday. 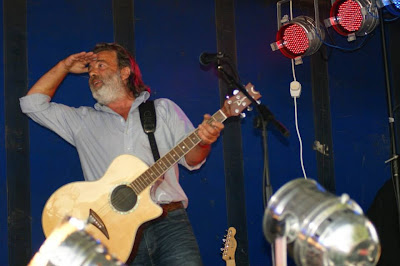 As always, lovely big stage (Chris had difficulty seeing me from his end, as you can see), and terrific sound, probably the best this year - well done to the soundcrew, and well done to all the dancers going for it at the front - particularly impressed with the two guys dressed as Roman Gladiators, hacking enthusiastically at each other with plastic swords during the somewhat manic last number...
A corking gig, and I'm only sorry I was driving and couldn't make more serious inroads on the barrel of beer they provided us with onstage...

(Plenty of great photos as well as the two above taken by Lou, all on our website photo page)

What with the number of gigs we've been doing recently, it seemed a shame not to do one on the Sunday as well, so off we trooped to the Old Royal Ship Inn in Luckington, a nice little (well, quite enormous actually) pub in the country, for an early evening 'family' gig, which in practise means you get to take the kids along whether they want you to or not. Worked out well, as there was plenty for the kids to do, what with a massive climbing frame, loads of hotdogs and the like, and a bouncy castle, which was mostly monopolised by Lou, our photographer extraordinaire and wife of drummer DFP. It looked a bit dodgy weather-wise when we'd got all the kit set up, but a few drops of rain was all we got, the sun came out, and we had a cracking time. Thanks to the pub for the food, too, 'twas delicious! 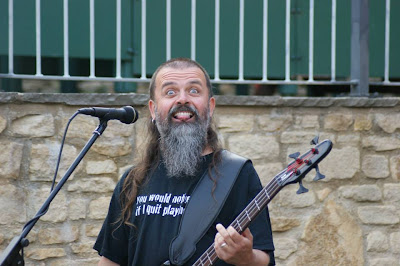 Posted by slylittlei at 9:40 PM