Four festivals in a fortnight!

Well, that was an extremely busy couple of weeks... we kicked off July at the Devizes Beer Festival down on the wharf in Devizes, and it was a ludicrously hot afternoon, with the stage in the full glare of the sun. I don't think I've ever been to a beer festival and drank less beer, it was too hot to want anything other than litres of water, and our Ruthie started to feel decidedly odd at the end of the set, and scarpered offstage for a lie-down in the shade. A great little do by Devizes CAMRA, and a good reaction from the crowd, especially considering the heat levels. Respec' to the three guys dressed in full Cavalier outfits, who were, apparently, the 'Three Mustgetbeers...' It made me feel hot just looking at them. Not in a good way, I should add.

A couple of nice pictures here, courtesy of Graham Brown: The next afternoon saw us on the Bandstand stage at Keynsham Festival, our second time at this one, and great fun to play especially as we weren't in full sun this time!
It all looked a bit iffy when we turned up, mind, as the backline provided onstage was a bit sparse, and there wasn't much in the way of drumkit - it's a common thing at festivals for there to be an onstage kit already there, and the drummers just provide their own snare, pedals, cymbals etc, but I reckon this is a bit of a hangover from the days when drummers weren't considered 'proper musicians', and were expected to just play whatever was there... I mean, you wouldn't expect a guitarist to just pick up some rented guitar and give a blistering performance on it, would you? Well, not if you know anything about playing guitar, anyway. Same goes for drums - a good soundcrew can mike up and linecheck a drumkit in 5 minutes flat, while the rest of the band are still setting up. Luckily, a good soundcrew was what we had, and the gig went down a storm - we had the best crowd of the day on that stage by far, and lovely it was to see some familiar faces in there, even some who remembered us from Brew Band days! A really nice little festival, and I hope it goes from strength to strength - we're certainly looking forward to doing it again. 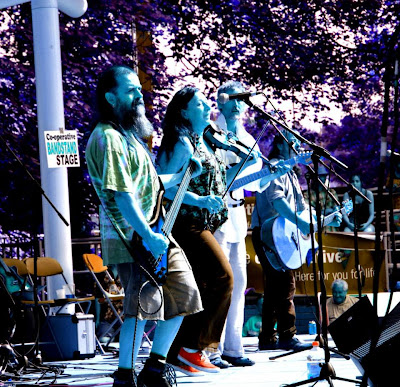 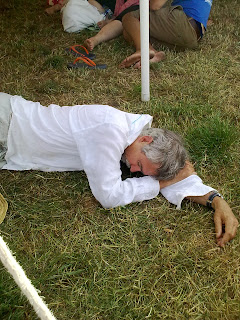 So, the next weekend started with the Newt Festival, down in Devon - we did this a few years ago, with an evening slot on the one and only stage, but this year they've introduced another stage, and we've got a mid afternoon slot on there - worked out nicely for us actually, as we had a good crowd sheltering from the sun, and it went down extremely well - many thanks to the soundcrew especially, who did a sterling job.
A bit disconcerting to have a bloke dressed as a fluffy pink pig dancing in front of us, but on reflection that might just have been me. (Well, I wasn't driving that day...)


<< No pictures of us have surfaced yet, so here's a picture of Simon our guitarist 'relaxing' after a few ciders... 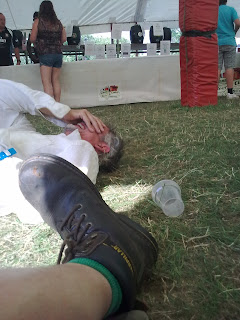 No rest for the wicked, and the very next afternoon we were at the Nailsea Beer and Cider Festival, where a lovely shady stage awaited us, as did a couple of thousand well-refreshed punters trying to stay out of the sun. We were the only band on that were doing their own material that day, which the soundman was very pleased about, I think he was all 'covered-out'... A pretty quiet reaction, (see video below) but to be honest we weren't expecting major crowd participation on a Sunday afternoon on one of the hottest days of the year, and we enjoyed our little selves thoroughly, especially afterwards, when we were free to get stuck into the large amounts of free booze available.
Ever wary of the effects that strong cider can have on the delicate constitution of one unused to drink such as myself, I elected to stay on the ales, sipping parsimoniously from the weaker ones, so as not to inflame any ill humours or anything. I'm reasonably sure that the 'Orkney Skullsplitter' (8.4%) counts as weak, anyway. Others however, were not so circumspect in their choice of refreshment... moving swiftly on from the 'Cat's Arse' and 'Nun's Chuff' ciders, the rest of the band settled on the 7.2% 'Fanny Liquor' (d'you see what they did there?) as the cidre du jour, and the Horizontal Hold swiftly began to go awry... there's something of a pattern developing here...

To round off that hectic couple of weeks, here's a rather splendid bit of video taken by Geoff Pharoah, of one of our new songs, 'The Long Walk Home' - I suspect that for the parents of these two somewhat overheated/excited toddlers, it did indeed prove to be just that... ;)

Looking forward to seeing you all at the Trowbridge Pump festival next weekend. Let's hope I can finally get to see you after several failed attempts.

Hopefully we won't be on quite so late as last year!