Well, this is a terrible state of affairs. I've neglected this blog to such an extent that I may well have been reported to the Royal Society for the Prevention of Cruelty to Blogs. I can only attribute this to the creeping terror of Facebook, and try to catch up a bit...
No less than four gigs since the last update, the first of which back in September was at the Three Horseshoes in Bradford on Avon; a new venue for us, and on the basis of that gig one we'd very much enjoy doing again - good crowd, good sound, and free beer! Doesn't get much better than that... The one sour note came from a couple of tossers who were trying to pick a fight with me as we loaded the gear back in the van, but being as we all got out of there with our gear and teeth intact, no harm done.

Next up was this little free festival organised by UNISON, on the same weekend as Brisfest: 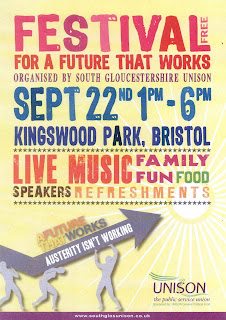 This was a really well organised do, on a beautiful sunny day in Kingswood Park, featuring three bands plus speakers from the local union branchs and various Labour politicos, and something we were very pleased to be asked to do.

Sadly, it didn't appear as if anyone had publicised the day anywhere at all, as it seemed like the only people there were either from the union or friends and relations. I guess that being on the same weekend as the much bigger Brisfest didn't help, either. A real shame, as the speakers were pretty much preaching to the converted, and the bands (us, the Mystery Chords and the Smokestack Shakers) were playing to a few dozen people at best.
Still, hopefully some lessons were learned, and if anything similar comes up we'd certainly be happy to do it.

The following weekend, we were back in the Stag & Hounds in Old Market, Bristol - a lovely comfy muso pub, and a good turnout, with two support acts, Sam Whitlock & Mirielle Mathlener, who were both excellent. Rather a late night in the end, and great to see so many familiar faces, including some I hadn't seen in years!
Special thanks are due to my lovely wife for this one as well, for staying at home to look after the kids, as I managed to book this gig on our Wedding Anniversary without realising. Oops...

Skipping merrily through the fallen leaves into October, and our last gig was back in the Oxford in Totterdown, Bristol - last time we were in here, the place was packed, with something happening every weekend and a great vibe about the place, but this time was very subdued... nothing on the 'What's On' board, hardly any punters, and a distinctly dodgy feel about the whole thing. Turns out that the pub was struggling to get it's music licence renewed, thanks to the complaints of one local resident (why is it that people like that move next door to a pub in the first place, let alone one that puts on live music?), but since then, thanks to the only sensible bit of legislation that our current car-crash of a Government have passed, the laws on music licensing have been relaxed considerably, and the Oxford is now back on form, and hopefully we'll be back there sometime in the New Year.

When we do, it'll be with a new drummer; our stalwart skin-thumper for lo these past ten years, Nick Wood, is moving on to pastures new, and we're currently rehearsing with our new recruit David Fitch-Peyton, who was previously in Bristol 'Riot Grrrl' band Crash Paris. As has been pointed out by our old guitarist Mick, Riot Grrrl bands are generally composed of, well... Grrrls, so it's unclear what he was doing with them in the first place, but anyway their loss is our gain - his first gig with us is coming up in a few weeks, at the Thunderbolt in Bristol - looking forward to it!
Posted by slylittlei at 8:50 PM