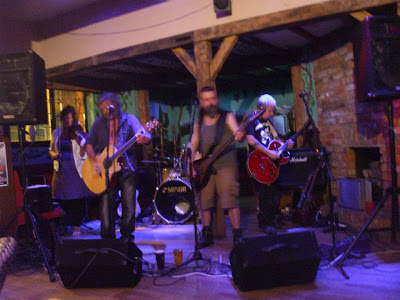 This gig should rightfully have been in the Raglan Arms, our favourite muso pub in Weston, but thanks to the actions of a few arseholes who decided to break into the place, have a party and burn it down, all bets and indeed gigs were off, until the Kameleon , a newish music venue in Weston, took over the Raglan’s roster, fairplay to them. The Kameleon was described to us as a place that was ‘finding its feet as a music venue’, and that would be a diplomatic way of describing it – it’s basically a Wetherspoons style pub full of blokes in white T shirts with shaved heads trying to cop off with women. Suffice to say, it wasn’t really our Target Demographic.
Still, it sounded nice where we were, and the few refugees from the Raglan who turned up made it worth our while – not forgetting the couple who came down from Birmingham, bless ‘em!
…and yes, I know the shorts make me look like Lofty in ‘It Ain’t ‘alf  Hot, Mum…’
It won’t happen again...
Posted by slylittlei at 1:21 AM