Friday night at the George in Woolley St, Bradford on Avon, pretty much a guarantee of a good night, and we weren't disappointed - turns out the landlord is a big fan of Porcupine Tree as well, so Nick & I were particularly chuffed to hear pretty much their entire works while we weren't playing. Pub was jammed to the rafters, loads of very familiar faces there too, which is always a bonus, and we had a blast - thanks, people!

Two for the price of one this weekend! Literally, 'cos the Pumproom in Trowbridge on Saturday was a benefit so we didn't get paid... a two-storey barn next to The Lamb pub, this venerable old building was the original home of the Trowbridge Village Pump festival, has been a folk club since the year dot and was recently done up & reopened as a venue. Unfortunately this last minute gig wasn't advertised, so apart from a couple of friends we told about it the night before (thanks for coming, Nick & Marilyn!), plus a representative from Shaftesbury Arts Centre who'd come up to see us (we normally attract bigger crowds, honest!), we played to an empty venue. The regulars in the Lamb stayed well away, possibly not even hearing us, as there was an ear-splittingly loud Karaoke going on in the pub. I say 'going on', but it was being so completely ignored that the bloke running it wandered in to listen to us after a while, swelling the audience by 25%... 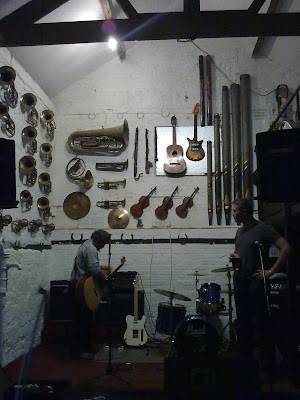 The whole thing was so surreal that we actually rather enjoyed ourselves, and decided not to nail our instruments to the wall after all...